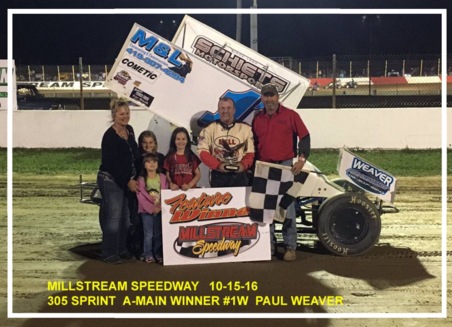 Mother Nature smiled down on the fans, teams and staff at Millstream Speedway on Saturday night as perfect weather greeted them for the final race of 2016 at the half mile speedplant in Findlay, Ohio. Paul Weaver, Shane Cottle, Kraig Kinser and Bob Daugherty would pick up wins to close the season in front of a great crowd.

Kicking off the afternoon was a live performance by Nashville Crush with an "Unplugged" musical set for the fans before the races. Also, a Trick or Treat session was held on the front stretch for the younger fans, who came dressed up ready to get some goodies from some very gracious racers, sponsors, and even vendors.

Feature racing kicked off with the 305 Sprint Cars, with Fremont Ohio's Paul Weaver picking up the win in the #1w. Patience was the key for Weaver, as several cations marred the 20 lap A Main. Weaver's winning pass came on the final restart on lap 16, as he would power under #1 Nate Dussel exiting turn 2 and never look back. Dussel would finish 2nd with #77i John Ivy 3rd,#8F Matt Foos 4th and #20B Cody Bova completing the top 5. Weaver also picked up a $50 bonus from On The Throttle with Duane Hancock for being the highest finisher signed up with Duane before the Friday October 14th deadline.

Next up were the Non Wing Sprint Cars in their 30 lap feature. Kokomo Indiana's Shane Cottle would pick up the $5000 to win A Main in the Paul Hazen owned #57. Cottle would grab the lead on lap 8 from early race leader #4 Michael Fischesser. Caution would wave for #11 Travis Berryhill coming to a stop on lap 11, and a scary accident on the restart involving #39 Matt Goodnight, #23s Kyle Simon, and #18 Todd Keen that resulted in Matt Goodnight being transported to a local medical facility for observation after walking to ambulance under his own power. The red flag would wave once again on lap 12 for #38 Dean Jacobs, as he would get upside down in turn 2. Dean would walk away unharmed. #93 Sheldon Haudenschild went to work after the caution, moving up to 2nd on lap 14, and taking the lead on lap 16. Haudenschild appeared to have the race well in hand until in hand until getting into the turn 3 wall while manuvering thru lapped traffic and damaging the front end of the #93, and ending the Wooster Ohio native's feature. Cottle would inherit the lead on the restart, and hold on to win over#33m Matt Westfall, #77 Dustin Smith, #11p Brady Short would be scored 4th after hitting the front stretch cone on the final restart, and being docked 2 spots, and Fischesser would complete the top. Cottle also received a $100 bonus from On The Throttle with Duane Hancocck on 1520AM out of Bryan, Ohio.

The Winged 410 Sprint Cars would take to the half mile next in a 30 lap A Main. Bloomington Indiana's Kraig Kinser would win the $5000 top prize in the Arctic Cat, MVT #11k. Kinser started the feature in 3rd and fell back early, as #10H Chad Kemenah took the early lead over #35 Stuart Brubaker, and #93 Sheldon Haudenschild, but all eyes were on #6m Jac Haudenschild, as the "Wild Child" put on a show after starting 17th. Haud moved up to 9th by lap 4 and seemed to be on his way to the front. Kraig Kinser got to the front first on lap 14, grabbing the lead from Kemenah, but once again, Jac was the star of the show, as he knifed his way through the middle of his son Sheldon and #5T Travis Philo as they battled wheel to wheel. Jac grabbed 4th place and seemed poised for more until a flat tire ended his night. Kinser would hold on to win over a hard charging Sheldon Haudenschild at the end, with Kemenah 3rd, #22 Cole Duncan 4th, and Brubaker completing the top 5. Sheldon Haudenschild picked up the $100 bonus from On The Throttle with Duane Hancock.

Wrapping up the night were the Stocks/V8 Trucks. 42 Stock Cars and Trucks filled the pits, with #21d Bob Daugherty picking up the win in the 15 lap affair, over #11A Kyle Moore. Lima Ohio's Tony Anderson would finish 3rd in his #22T, with #J3 Tim Murphy 4th, and #69 Rob Trent completing the top 5. Tony Anderson picked up the $50 bonus from On The Throttle with Duane Hancock. 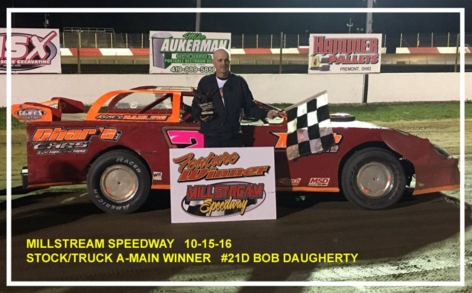 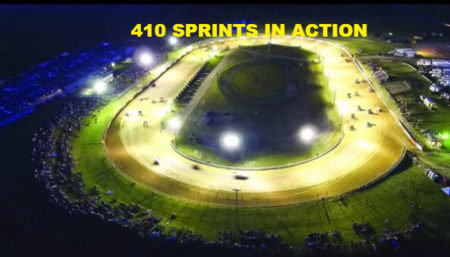 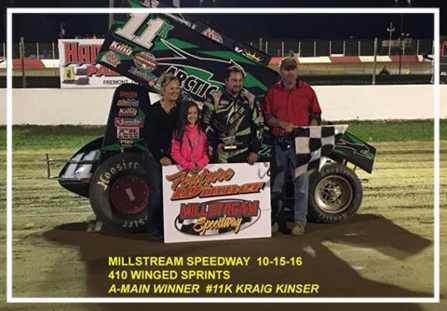 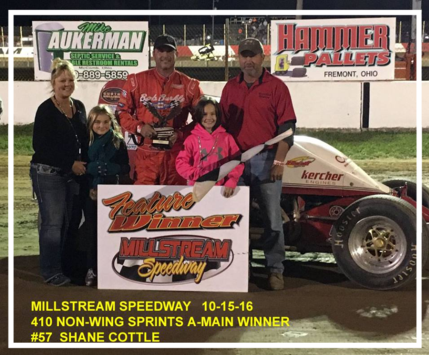 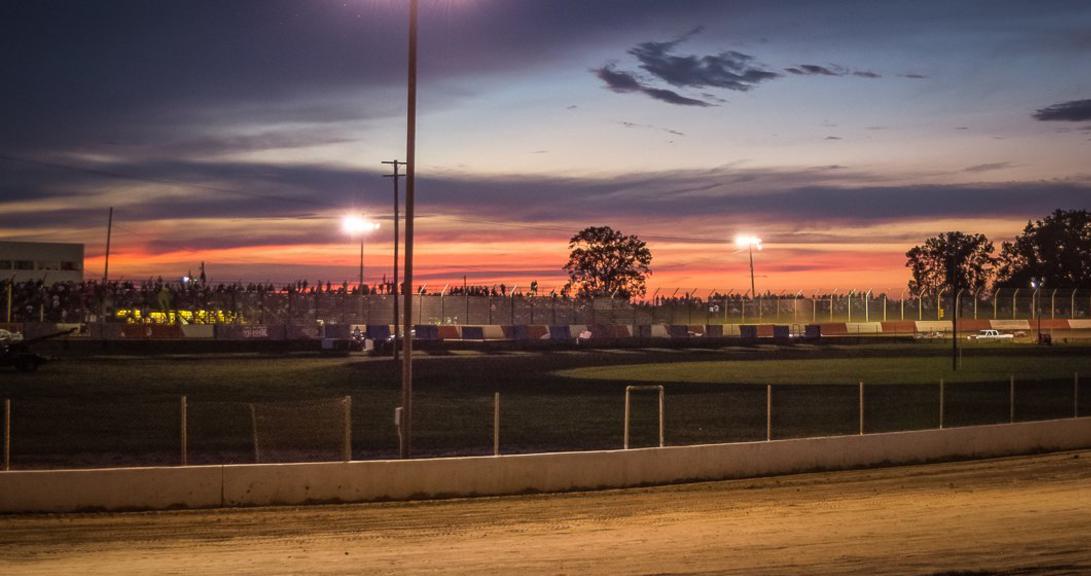